Amy
Just a girl...making my way the best way I know how.

I hope you enjoy my blog posts. If one makes you happy or sad or angry or mad, please comment. I love comments!

For newcomers, I thought a cast of frequently mentioned characters might help. I try to give good descriptions of people as they are mentioned but these are some of the important people in my life that might be mentioned on a more recurring basis (in no particular order)

Pacey - My African Grey Parrot. She will live to be 80, talks, has the intelligence of a 3 year old and is truly part of the family.

My Mom - An awesomely strong, funny, beautiful woman who has made me who I am.

My Dad - To say I am a Daddy's Girl is a HUGE understatement. I'm very lucky to say my parents are my friends.

Mike - My baby brother. His wife is Mary Beth. Mike is a golf pro. He is 6 years younger than me and even though we only talk every few months, I still think we are close and there isn't anything I wouldn't do for him. He loves biking and golfing and is growing up to be an amazing person.

Shelia - I have worked with Shelia for years but we have gotten closer over the last few years. We spent an awesome week in Key West and she is one of the people that inspired me to start this blog and write. Check out her blog at sheliataylor.com.

Fight Club - this is my book club and is pretty much awesome. I have been a member for over 8 years and the people in it are some of my closest friends. Fight Club is the first place that I felt completely comfortable being who I am. I love them for that. Core members are: Jon and Tracey McDaniel, Jen and Charlie Gaddy, Erin Martin, Tim and Jenn Schleining (even though the Schleinings moved, they are still Clubbers to me).

Sandy and Miller - Sandy used to be my boss and now she is my friend. She had a baby and I was lucky enough to be her birth partner. We went through birthing classes together and I was there when Miller was born. He is my surrogate nephew and I am very lucky to be able to spend time with him as he grows up and becomes an amazing little man. Sandy is strong, sarcastic and hysterically funny and I love her for letting me be a part of her and Miller's life.

Honestly, I didn't know a lot about the whole Northern Ireland/Republic of Ireland conflict when I planned the trip to Ireland.  We knew we wanted to see Giant's Causeway in Northern Ireland and since we were up that way, I knew I wanted to check out the Titanic Museum in Belfast. Even though I didn't have the specifics, there was an inherent danger to the North and specifically Belfast.  I researched where it was OK to be Catholic, where I shouldn't say a word.  I registered with the State Department in case "Something Bad" should happen. I was expecting bombings, or at least buildings that had been recently bombed.  This was Belfast after all, home of The Troubles, the IRA and Other Bad Things.
So on our way to Northern Ireland, I read up on the issue.  While it is completely naive to summarize a centuries long conflict into black and white absolutes after reading a few articles, I will do just that for you.   In the 1600s, the English protestants looked across the English Channel and decided they wanted Ireland for their own.  Since the northern part of the country was wealthier, they sent missionaries to convert the Catholics and settle the land.  As you can imagine, the Catholics did not like this and many wars ensued.  In 1795 The Orange Order was founded, committed to upholding the Protestant Values and staying true to Englishman William of Orange (why orange is the color of protesters, even today). In 1801 Ireland officially became part of the United Kingdom.

Native Irish people didn't like that at all and the fighting continued between the Nationalists who were mostly Catholic and wanted Ireland to be its own country, and the Unionists, mostly Protestants who though Ireland should remain part of the United Kingdom. In 1920 the country was officially divided into Southern Ireland that became The Republic of Ireland and Northern Ireland, which remained part of the United Kingdom.

The real problems started in the 70s with the formation of the Provisional Irish Republican Army.  The IRA had traditionally been non-violent; the new IRA relished in violence.  There were bombings, killings, shootings.  1972 was a particularly bad year. You have probably heard of Bloody Sunday, made famous by U2. That is when 26 non-armed civil rights protesters were killed.  Bloody Friday, a day when 22 bombs were detonated in Belfast in just over an hour's time, also took place in 1972. In that one year over 500 people died, most of them civilians.   Over the next 35 years there were more bombings, peace treaties, shootings, hunger strikes and over 3500 people died.  Walls were built between the Catholics and the Protestants.  Check points and searches were customary just to get around the city.

There has been relative peace since 2009 when major leaders announced they were going to try to settle matters peacefully,  the borders have been removed and for the most part Belfast and Northern Ireland is a safe place to go.  I say for the most part because as recently as July 12, 2012, there have still been riots.  The Orange Volunteers still do parades and are still banned in some parts of the country.  Peace is tenuous at best.  We were there on the 40th anniversary of Bloody Friday and protests and parades were planned, with orange being the color of the day.

So I rode into Belfast on the train expecting to see destruction, armies or at least some indication of their history.  I was quite surprised with what I found. 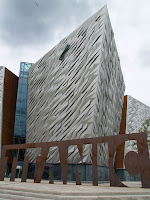 Belfast is a large city, industrial in parts, but quite lovely with an amazing energy about it.  Out first stop was the Titanic Museum.  My parents were Titanic buffs, so I knew a lot of the history.  Since the ship was built in Belfast,the museum really went into how the actual ship was built.  The museum included a ride, interactive displays and life size models of the various class rooms.  I was most interested in the after effects of the sinking; the story of the boat and the men who had to recover the bodies from the ocean (only 1 in 5 bodies was ever found), catalog them and try to identify them.  A lot of time was taken on the legal ramifications, the changes to ship safety and the impact on procedures. It was quite a neat tour. 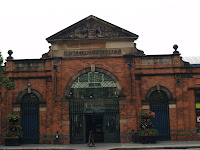 We left there and headed to St. George's Market, a local farmer's market with artists, craftsmen and lots of food.  There was fresh fish, every type of food you'd want (even over sized, fattening American food at Fat Daddy's). There was a jazz band playing in the middle and we wandered around for hours, sampling cookies, cakes, peanut brittle and buying jewelry and gifts.  This was our slice of life tour, as we sat and ate lunch we noticed we were the only Americans to be seen. We were living how people in Belfast live, going to the market for Saturday, meeting friends, grabbing a bite to eat.  It was fantastic people watching for sure. 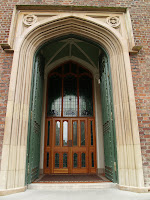 We left St. George's and wandered the streets looking for cool architecture, which was everywhere.  We went shopping, took pictures and even stopped in a Catholic church, meeting a sweet little old lady who was looking to go to Confession.  She was from Belfast and asked where we were from. When we said North Carolina, she said "Raleigh."  No, we said.  We are from Charlotte.  She shook her head "Raleigh is the capital.  I know all the capitals of the United States."   Again I was struck with how ignorant we are as a country. 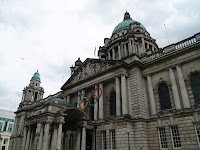 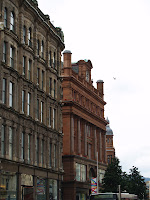 We hopped back on the train and headed back to Portrush.  I wished I could have spent more time in Belfast and might try to take a trip back there one day.  The history, combined with the energy of the country is very compelling to me.  Everyone we spoke with was quite nice and the city itself is gorgeous. The Capital building has the huge grassy area and people were picnicking, playing Frisbee and a huge TV was set up for people to watch the Olympics. Belfast is very much part of Great Britain and Olympic Rings were everywhere, sometimes next to names of ships built along the docks.   The currency is in pounds, accents are sharper, more Scottish, and the feeling is overwhelmingly British. The city has FANTASTICALLY huge bike lanes, is very walker friendly and had musicians on almost every corner. Belfast was the opposite of the quiet farm community we had spent the first part of the week at, but it still was an amazingly comfortable city. It felt like a safe place to be anonymous, and that is something that appeals to me for some reason. 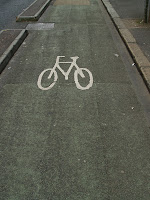 So I didn't see bombings and nothing BAD happened to me.  I'm not so sure that the war is over and while I sympathize with the Nationalists, there is a point where you are killing your neighbors and families and you just need to get on board with the change.  Again, easy for me to say.  I do think it is interesting to read how much The Troubles have affected Northern Ireland as a society.  Suicide rates are higher, sexual promiscuity is high with STDs being higher in NI than anywhere else. Alcoholism rates are higher and there is a general lack of trust.  But even with that I am intrigued by Belfast, feel an odd sense of wanting to know more, to see more, to feel more of it. Maybe it is just the change to see history made real, maybe it is something else. I was very aware of my religious upbringing in the city and that made me feel connected in a way that makes no rational sense.

If you get the chance to go to Belfast, go!  It is being touted as the next "must see" city and the local government has gone to great lengths to revitalize the entire area. It's worked, and I must admit I have a wee bit of a crush on Belfast.
Posted by Amy at 7:56 AM No comments: